YouTube vs Twitch. Which is Better for Making Money?

A few years ago, the word "stream" was used to refer only to a live broadcast, say, on YouTube. Any user could set up a real-time broadcast and entertain. While users still do this, today, the technology has reached a completely new level. For one, the bandwidth and speed of the Internet have increased significantly. Also, the same game streams and live broadcasts have acquired much higher broadcast quality with more features.

Recently, the pandemic raised the demand for streams. Since people in most developed countries ended up in self-isolation at home, streaming replaced live in-person communication. In 2020, due to the pandemic, not only workflow but also entertainment moved online, and streaming services were in demand more than ever.
Internet platforms themselves fight for audiences, expanding their capabilities, attracting streamers and bloggers, and allowing them to monetize their content. Streams have now occupied a separate niche with video games.
Today, some of the most popular streaming platforms are YouTube and Twitch. Let's take a closer look at how they differ and compare YouTube streaming vs Twitch.

Although YouTube and Twitch are platforms for video content, they differ in their content.
For example, Twitch attracts content that is mostly about live gameplay, which is a live broadcast.
Speaking about Twitch or YouTube gaming, watching other people play has become a popular form of entertainment. You can communicate to people around the globe which you can never meet IRL.
In addition to games, other live streams include talk shows, reviews, and other gaming topics covered on Twitch.
YouTube is a mixture of viewers switching between pre-recorded videos and live streams.
The golden mean for many streamers is a strict separation of stream and video content. For live broadcasts - Twitch; for videos - YouTube. 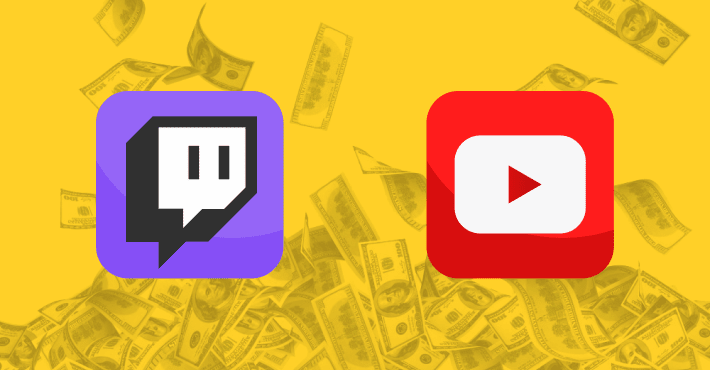 One of the most popular questions out there: Where can you make more money on broadcasts - YouTube or Twitch?
Let's take a closer look at the different ways to monetize on these sites.

Making money by streaming on Twitch is a promising way to earn money globally if you correctly approach the matter. Here are six ways to make money using Twitch:

Let's consider each of them individually.

The more subscribers you have, the higher the likelihood for advertising to appear. The channel owner has the right to place sponsored links in their profile or advertise on their stream. You do not need to enter into a partnership agreement for this.
However, this option is only suitable for those streamers who have a large audience.
But remember this essential rule: intrusive ads can lead to the loss of viewers.

You can contract with Twitch to display embedded ads. This resource will use your streams as an advertising platform, and you will receive 3.5% per 1000 views of contextual advertising that Internet users watch during your broadcast. However, keep in mind that many users have AdBlock installed to prevent ads. Therefore, do not place high hopes on making money with this method.

It is possible for persons to leave a voluntary donation to a streamer. Players can leave links to e-wallets and, interestingly, more and more users want to thank the streamer for interesting video broadcasts.

Why would someone donate to a streamer? There are several reasons for this:

To make money streaming this way, you first need to gain some popularity.

The essence of a paid subscription is as follows: an Internet user becomes your subscriber by paying for this service. The profit is split equally between the platform and the streamer. Most often, when users take a monthly subscription, the cost is determined directly by the channel's creator. It can range from $ 2.5-5.
Not every user is willing to pay a streamer, especially if they are not very popular. Therefore, your potential subscriber should receive a nice subscription bonus. Sometimes, the platform takes care of the streamer by advancing functionality (higher quality video, access to chat, etc.) to the one who paid for the subscription. Popular streamers can make good income from subscriptions.

If a streamer has a large audience and an army of loyal viewers, they can make money selling products.
Popular streamers are often targeted by direct advertisers, from pizza delivery to well-known computer brands. A banner appears on the streamer screen that programs cannot block. Consequently, the larger the viewer audience, the higher the cost of placing such advertisements.

You can earn additional income by saving the recording of the broadcast then using a unique program to publish the video on YouTube. Firstly, this content can be monetized on the channel. Secondly, it is an opportunity to attract new audiences on Twitch.

This is one of the main ways for YouTubers to make money. An advertiser asks the author of the video to tell them about their product and pays money for it. The amount depends on the number of subscribers, views, and the topic of the channel.
But guard your reputation and do not chase profit: if you agree to advertise a dubious financial project, it is unlikely that a bank will come to you with advertising in the future.
If you have a highly specialized channel, for example, about board games, try reaching advertisers yourself: write to stores or board game manufacturers, tell them about your channel, and offer to collaborate.

You've probably seen promotional videos in front of the YouTube videos. Advertisers place them through the Google Adsense ad network, and YouTube decides what to show to whom.
For a blogger to receive a reward, the viewer must watch the ad to the end, or at least 30 seconds if the ad is long. Moreover, 45% of the amount paid by the advertiser goes to YouTube.
The service does not show ads to viewers with a YouTube premium subscription. For compensation, YouTube pays creators for each video view by a viewer with such a subscription.

Various agencies offer YouTubers the opportunity to sign a partnership agreement. For this, they will take another 20-30% in addition to what has already been taken by YouTube. In return, the agencies offer assistance in promotion, training, technical support, and promise to make life easier for a novice content creator in every possible way.

Selling Your Goods or Services

A YouTube channel will help with customer acquisition. No matter what activity you are doing, if you're a pro, YouTube is a great way to engage your audience.

There are not many creators on YouTube who exclusively stream. Authors mostly stream occasionally to diversify content and communicate with subscribers. Although there are channels that stream the completion of video games, organize online concerts and quizzes, and conduct lectures.
During the broadcast, the authors can collect donations. Viewers who want to financially support the author transfer money to a card, electronic wallet, or special services.

These tools allow creators to generate additional income from streaming. Viewers can send paid messages in the chat which are highlighted in color and sometimes pinned to the top of the feed for a specific time. The amount of the donation is determined by the viewer. The more they pay, the longer their message will remain in the chat. 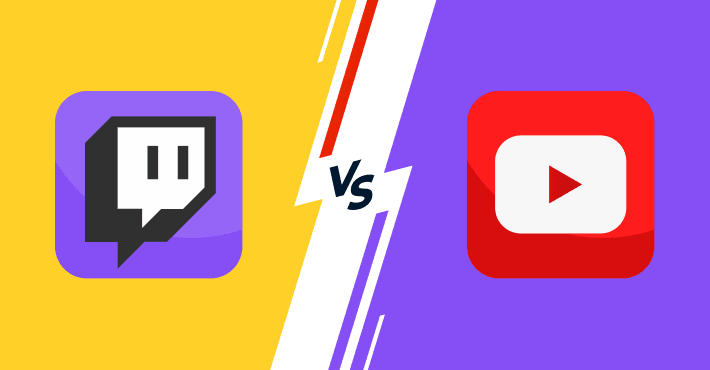 The Twitch Affiliate Program is a service that allows Twitch channel owners to capitalize on their audience through advertising, game, or merchandise sales. To participate in the affiliate program, the channel must meet the minimum requirements:

The money earned is paid by check to a bank account or through PayPal.
The Twitch partnership has two stages:

According to the rules, channels that meet the following requirements are allowed to participate in the YouTube Affiliate Program:

Where is it better to stream: Twitch or YouTube? This is an eternal dilemma for both professional players and newly arrived streamers. These two giant sites offer their followers dozens of interesting features and unique offers for steady development.
It's up to you to decide what you value more about the streaming service. As a viewer, if you are looking for higher quality video content with less lag, then YouTube Gaming is the choice. But if you play popular games with live streams, then Twitch is better for you. 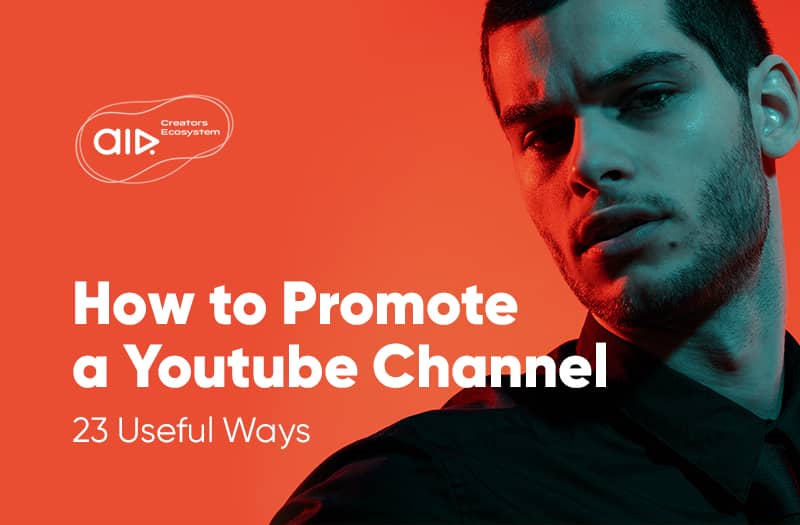 Whether you’re a newbie or an author with a gold button, you can always get more views on your videos! YouTube has an audience of 2+ billion monthly visitors from 100+ countries, and they might love your content! 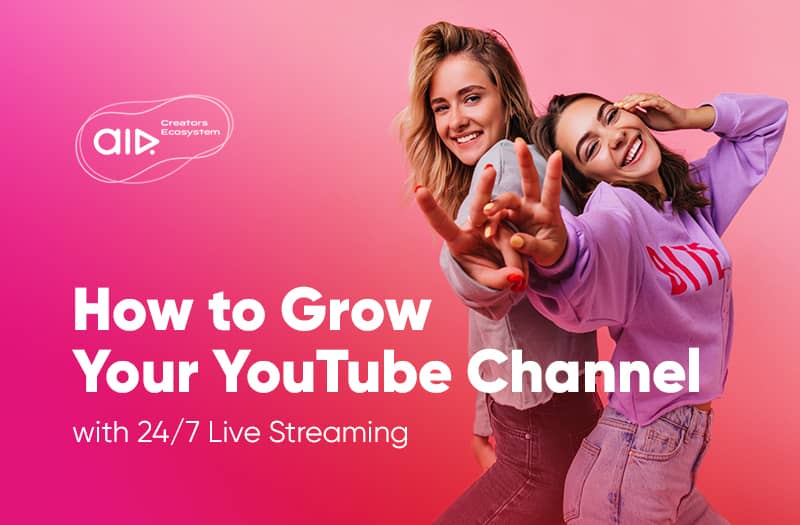 How to Grow Your YouTube Channel with 24/7 Live Streaming

We’ve heard about some great advantages to using 24/7 live streaming on YouTube and how significantly it can grow a channel’s traffic. But is it really that easy to start streaming and what does it take to start? Let’s take a closer look. 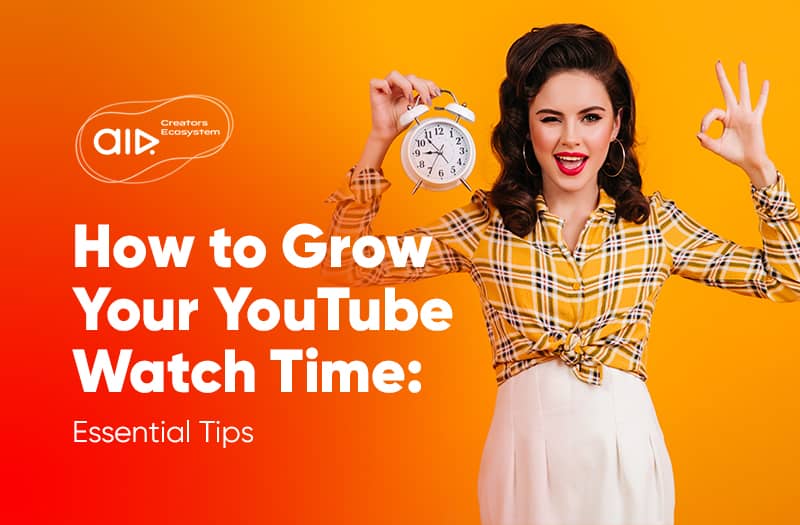 How to Grow Your YouTube Watch Time: Essential Tips